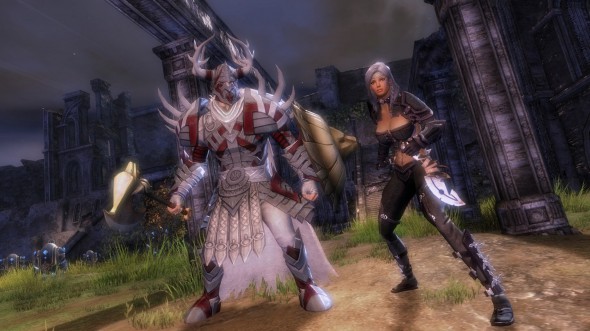 General
• Fixed a bug in which some ring effects with a range of 600 were appearing larger than they should.
• Exhaustion: This boon now stacks in duration up to 3 times.
• Confusion: This no longer deals damage when a skill is prevented from activating due to an invalid position of the target relative to the caster.

Elementalist
In this update, and in the future, we’re looking to enhance the support role of tempests through boons, healing, and cleansing. Specific to today’s release, we’ve adjusted the tempest’s support through its skills, shouts, and traits. With this in mind, we’ve added some classic elemental attunement support to each of the shouts, and we’ve altered Tempestuous Aria so that its support functions are easier to access for tempest players.

Engineer
With this update, we’re reworking one of the less reliable skill sets: gyros. While potent, their difficulty to use and to optimize has brought them to a spot where they’re not really desirable outside of a few niche situations. As part of this rework, gyros are being reclassified as wells, and the scrapper’s particular version of them is mobile and point-blank to enhance the scrapper’s melee-oriented playstyle.

Guardian
Righteous Instincts has been an incredibly potent trait since it was reworked to grant a large boost to the player’s critical-hit chance. Because of this, it has crowded out other grandmaster options for the radiance build. In this update, we’re bringing down the power of this trait to be more in line with other grandmaster traits and to give a little boost to its competition. Furthermore, we are giving a small boost to staff and torch weapons and enhancing Hallowed Ground to help it achieve its purpose: to help allies manage crowd control.

• Symbol of Vengeance: Fixed a bug that caused this skill to function improperly with the Symbolic Avenger and Symbolic Power traits.
• True Shot: This skill’s range has been increased from 1,200 to 1,500.
• Tome of Justice—Chapter 2: Igniting Burst: Fixed a bug that could cause this skill to fail to hit foes at the center of its radius.
• Cleansing Flame: Increased this skill’s damage per hit by 21%. The final hit of this attack inflicts 2 stacks of burning for 4 seconds.
• Hallowed Ground: Increased this skill’s radius to 360.
• Amplified Wrath: Instead of burning foes that the guardian blocks, this trait now increases the duration of the burning passive effect applied by Virtue of Justice by 20%.
• Honorable Staff: This trait now grants 120 concentration, plus an additional 120 concentration while wielding a staff, in addition to reducing staff skill recharge times.
• Lesser Smite Condition: The damage of this trait has been reduced by about 40% in PvP only.
• Perfect Inscriptions: This trait now applies its shared signet passive effect to the guardian in addition to their allies.
• Radiant Fire: Fixed a bug that caused this trait to occasionally fail.
• Righteous Instincts: This trait’s critical-chance bonus has been reduced from 50% to 25%.

Mesmer
After watching mesmer builds develop following our last update, we have a few more adjustments for both chronomancers and mirages.
While we think that Signet of Inspiration’s new functionality is working well, it’s a little too strong, so we’re slightly reducing both the recharge time and the extension of the boon duration. This still leaves it a little on the strong side, but we don’t want to remove it entirely. Similarly, the Danger Time trait ended up being too strong; we’ve been seeing some very high damage numbers coming out of chronomancers who are also bringing support skills.

Lowering the defiance-bar damage on Signet of Humility made it fairer when compared to other defiance-breaking skills, but left it in an unsatisfying place due to its high recharge time. We’re lowering the recharge time in PvE areas to allow it to be used more frequently in situations where additional defiance damage is needed.

Finally, we’re slightly reducing the duration of the Mirage Cloak dodge in order to make it more like the normal dodge move. When we first built the mirage specialization, we felt that the dodge window had to be larger than a normal dodge in order to compensate for the fact that the player doesn’t move with the dodge. As players have become more accustomed to the specialization, we’ve found that this advantage is no longer necessary. Coupled with the superspeed that’s granted by the other minor trait, mirages can travel significantly farther than a normal dodge while attacking. This change does not affect the window for an ambush attack, which has always been on a separate timer.

Necromancer
As we continue to update the necromancer, we’re looking at each of its elite specializations and moving them more toward their expected roles. Scourge applies a bit too much instant corruption pressure in large-group WvW settings by simply laying down shades; we’ve reworked Unending Corruption and renamed it Herald of Sorrow to address this. The reworked trait now acts more like a delayed version of boon corruption that also grants an area-of-effect barrier. Reaper has seen an excessive loss of damage with the update on traits in the last patch. We’ll be pushing some of its damage higher through skill updates in PvE, but will be mostly leaving it alone in competitive modes, as all the necromancer specializations have a healthy representation in competitive game modes.

Ranger
In our last balance update, we made a few changes to Nature’s Vengeance to tweak the boons provided by each spirit. In this update, we’ve applied major changes to the spirits themselves. Active spirit skills are generally not usable due to the high cost of sacrificing the spirit and the localized effect that the sacrifice causes. We are changing these active skills to teleport the spirit to the player’s location before the spirit uses their skill. Additionally, we’re removing the 100% health sacrifice. In exchange, spirits no longer have preset time durations for how long they can stay alive and instead lose health as they passively enhance allies. This is intended to provide a more dynamic gameplay experience than their current cast-on-recharge functionality. Of course, spirits can still be used in this manner, but proper use of the ranger’s healing skills and more powerful active skills to reposition and attack with the spirits will yield stronger results.

Revenant
We’re making some changes to the revenant in this update that will curb their excessive condition damage in PvE and bolster their damage in PvP. Additionally, we’re making a few changes to help power builds that are struggling in PvE but doing well in competitive modes. Targeted Destruction, for example, will now grant higher damage bonuses in PvE areas where higher stacks of vulnerability can be maintained, but lower damage in competitive modes where applying multiple stacks of conditions is harder.
Song of the Mists has struggled to compete with the other grandmaster traits in the Invocation line even after its rework, so we are improving various aspects of the skills, making them easier to land hits and stronger when fewer targets are struck.

• Inspiring Reinforcement: This skill can no longer hit the same target multiple times in a single cast.
• Natural Harmony: Fixed a bug that could cause this skill to fail if the player was in the air or swimming on the surface of water after the skill had finished charging.
• Ashen Demeanor: Fixed a bug that could cause this trait to apply conditions to the revenant if they were knocked off their mount.
• Targeted Destruction: This now grants 0.5% damage per each stack of vulnerability instead of a flat 10% bonus. It’s also no longer split between game modes.
• Draconic Echo: Fixed a bug with this trait that prevented lingering passive effects from granting boons while the revenant was in other stances.
• Shackling Wave: Increased this skill’s damage per each additional strike by 40% in PvE only.
• Searing Fissure: This skill now applies 3 stacks of burning for 3 seconds on its first hit, and 1 stack of burning for 1 second on the next three hits. The damage of the first hit has been increased by 100%. Increased the recharge time from 3 seconds to 6 seconds in PvP and WvW only.
• Rampant Vex: Reduced the duration of torment applied by this trait from 4 seconds to 3 seconds.
• Song of the Mists: This trait’s radius of effect has been increased from 180 to 240. The effects provided by each skill activated by this trait have been updated as follows:

Thief
We’ve been looking at ways to improve the pistol main-hand and dagger off-hand build for thieves. We wanted to give the weapon pair a little more lethality without improving other weapon sets or removing current utility, so we decided to go with the mechanic we used for Tow Line during the underwater update. This allows Shadow Strike to flip over to Repeater for a period of time. Additionally, the team has adjusted Unhindered Combatant so that exhaustion scales with the severity of the condition that was removed. Finally, we’re reducing the duration of stealth for Silent Scope in competitive modes so that it is more of a brief respite in combat rather than a stealth upkeep trait.

• Sneak Attack: Increased the duration of bleeding that’s applied by this skill from 4 seconds to 6 seconds.
• Shadow Strike: This skill now grants access to Repeater for 4 seconds upon landing a successful melee hit.
• Repeater: For builds that use a pistol in their main hand with no off-hand weapon, the damage of this skill has been increased by 20%. Striking a foe with this skill now applies 4 seconds of bleeding per hit.
• Shadowstep: The window to use Shadow Return after using this skill has been increased from 10 seconds to 15 seconds. A tool tip has been added to show the window’s duration.
• Silent Scope: The duration of stealth that this trait grants has been reduced from 3 seconds to 1 second in PvP and WvW.
• Unhindered Combatant: The duration of exhaustion that this trait applies when dodging is now 2 seconds if crippled is present, 3 seconds if chilled is present, and 4 seconds if immobilized is present. Exhaustion will now be applied when the dodge is initiated.
• Lead Attacks: Fixed a bug with this trait that allowed players to enter combat with more stacks of the damage effect than intended.

Warrior
Banner skills have long been very passive in nature. Today we’re releasing some changes to give them a bit more active gameplay while also reducing their granted attributes to give greater role flexibility in group settings. However, we do think that the warrior gives up a lot in order to use them, so we’re increasing the bonus stat gains when warriors equip traits that modify banners. As a larger change, we’re also removing the bundle skills from banners and changing the pick-up action to now recharge the banner skill. Previously, the banner skills could be a trap for players, providing weaker skills in a bundle that anyone could interact with. We considered enhancing the banner skills, but we don’t want banners to be alternate weapons that take away from a player’s normal weapons.

• Banner skills have been reworked as follows:

• Battle Standard: Resynced the time at which a banner appears to properly line up with the effect. When planted in the ground, this banner skill now deals damage to foes within a radius of 180. Foes who are in a downed state are now finished when damaged by Battle Standard. This skill’s targeting reticle will now display the radius for effects that finish foes who are in a downed state and effects that revive allies.

• Inspiring Battle Standard: This trait has been renamed Doubled Standards. It no longer causes banners to apply regeneration and instead causes the warrior to gain 5 seconds of swiftness when summoning or picking up a banner. Additionally, the banner effect improvements that are gained when this trait is equipped have been increased from 50% to 100%.